Here’s an anecdote about how I came to be drinking mate with my bus drivers at 5 a.m.

The bus ride to Mendoza was supposed to be 14 hours long, but with traffic it ended up being about 19 hours total. A guy dressed like a businessman sat across the aisle from me and this one guy named Pablo. During the trip, I heard the man open some cans, and I assumed it was soda. I later realized it was probably beer.

Around 3:45 a.m., while I was attempting to sleep, I heard the sound of vomiting. I thought I misheard it, because I just assumed no one would be vomiting in the aisle of a bus. Unfortunately, I was wrong. The guy was throwing up in the aisle, and then he leaned even farther over and vomited into the lap of the peacefully slumbering man sitting next to me.

I woke up Pablo next to me, who expectedly was distraught when he realized he had a stranger’s vomit on him. Luckily he brought an extra pair of pants in his carry-on and changed. The only other empty seat on the bus was next to the man vomiting, so we didn’t have many options. I definitely did not want to sit next to vomit for the rest of the trip, so we sat with the bus drivers.

When one was sleeping in a small bed behind the driver’s seat, I sat in the passengers seat and my new friend Pablo sat on the stairs. The drivers were really nice, and we drank mate and talked while watching the sun rise.

Around 9:30 a.m., another bus from the same company stopped in front of us and our driver moved me onto the other bus, where I slept for almost the rest of the time. The whole experience was an eventful way to start off the trip.

Once we pulled into Mendoza around 2 p.m, we went straight to the hostel to drop our stuff off. Hostel Square Independencia was very cute and cozy, and it was probably my favorite hostel that I’ve stayed in so far. It had a beautiful patio that we sat in often during our stay. The hostel also offered free wine from 7-9 p.m., an offer which we took up every day. It was the best way to meet people, and I made friends with people from Brazil, Colombia, Netherlands, Australia and France. The hostel’s breakfasts were the best breakfasts offered at a hostel. You could order pancakes or eggs, and they always had medialunas and bread. 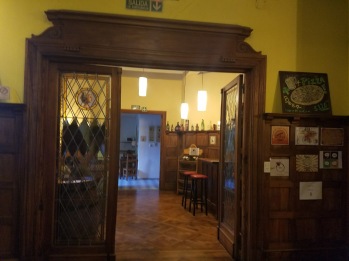 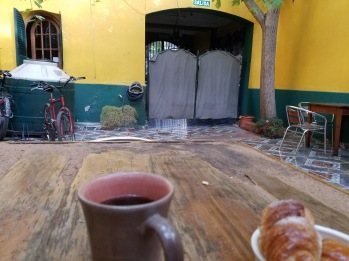 The first day we didn’t do too much other than walk around and eat. I started the trip off well with a lobster and shrimp risotto. 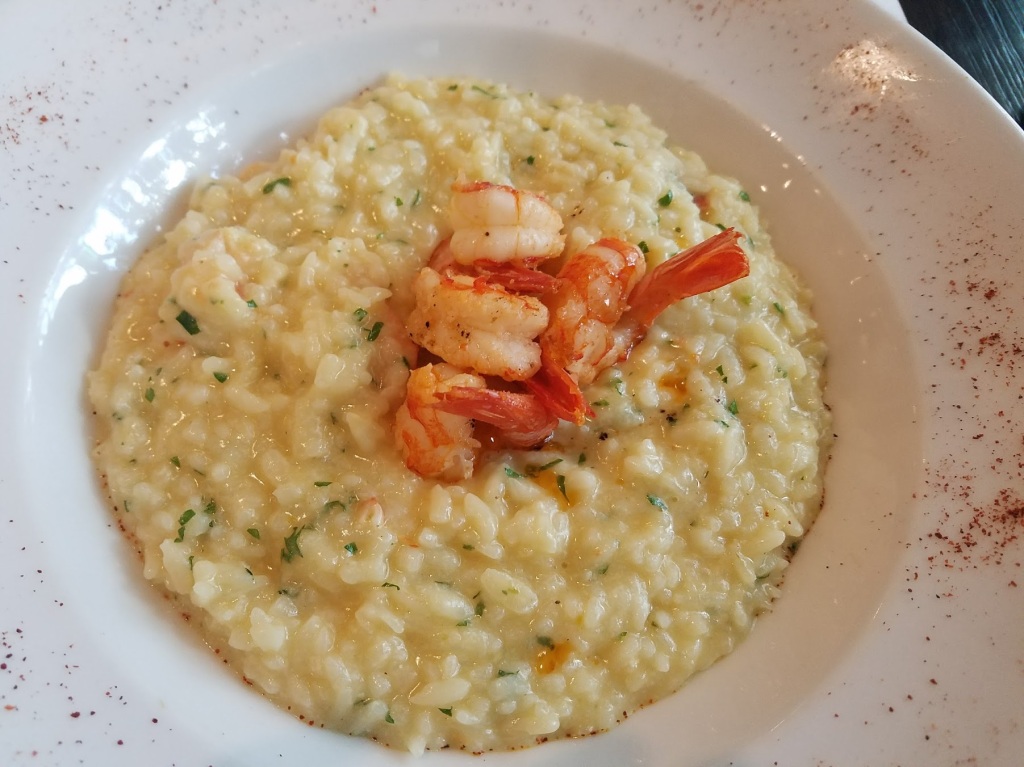 The streets of Mendoza are interesting because they have exposed gutters that look like an accident waiting to happen. I could see myself falling into them and breaking an ankle. But other than that, the streets were green and charming. 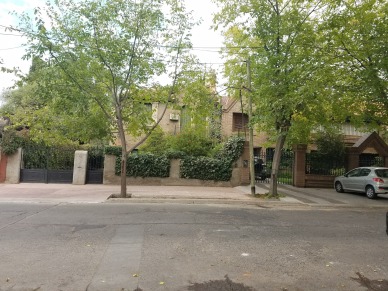 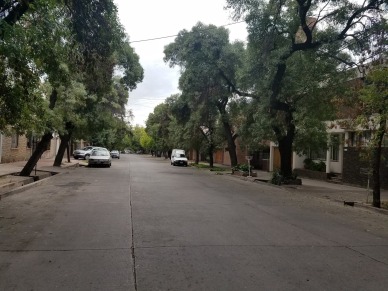 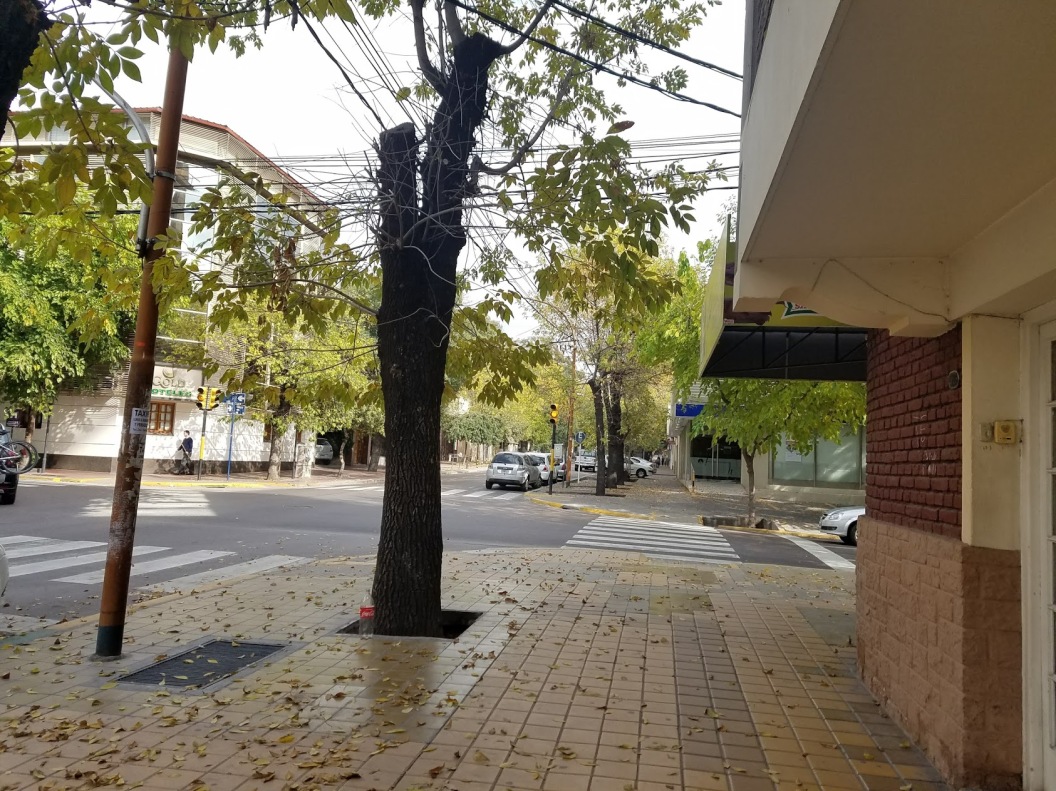 In the morning, we were planning on taking a bus to a hiking spot, but we woke up too late and most of the busses had left. It was also a little confusing to plan it. Instead, we walked to a hill that would give us a view of the city. A grand, beautiful monument stood on top of the hill. I was expecting actual hiking, but it was still fun nonetheless.

We also proceeded to take a bunch of photos with the good view. There’s a couple of me falling off a rail and a picture with all three of us.

After we climbed the hill we found lunch, and I had a pizza with pineapple and brown sugar (yes, I know Gordon Ramsey says pineapple shouldn’t be on a pizza, but whatever).

Taking up the hostel’s free wine from 7-9 p.m., we hung out in the patio and made friends. I met a professional soccer player named Esteban from Colombia and a guy named Vicent from Brazil. My friend Pablo from the bus texted me and asked if we would like to go on a night-hike with him and his friend, and he said we could bring as many people as we wanted. I brought seven other people, my new friends from the hostel. We took a taxi and his friend’s car 20 minutes away to the start of a hill.

Because it was dark, Pablo and his friend were having issues finding the trail, but we eventually found it and started up. It was a longer trail than I thought it would be, and took about four hours total. We finished around 1 a.m.

It was gorgeous. As we climbed higher, we could see more of the city lights, and once we reached the top of the hill at a cellphone tower, the whole city was in our view. Hiking has the power to make strangers friends, and that’s what happened on our trek up some hills.

Whitewater rafting in freezing cold weather while it is raining probably wasn’t the smartest thing to do while I was getting over a cold, but we did it anyway. And it was a lot of fun.

The rafting company was about an hour’s bus ride to Rio Mendoza, and the buildings were built on the sides of the hills. It was a dreary day outside, and fog rolled down the tops of hills.

We had to get dressed into wetsuits, jackets and helmets, and we climbed into an orange raft with an instructor who ordered us what to do in Spanish. “Adelante!” “Alto!” “Adelante!” “Dentro!”

We were soaked from the rapids splashing into our faces and the rain constantly pouring, and when we got off the raft we could no longer feel our hands or our feet. But we still had a great time.

That night for dinner, we had an asado dinner that our hostel offers for only 200 pesos ($12). It was a huge platter of steak with chorizo, and it came with salad and bread, and a pitcher of red wine. We couldn’t finish all of it.

And finally, before our bus would take us home to Buenos Aires at 8:30 p.m., my friend Emilee and I took a wine bike tour on Easter.

Sergio runs these Mendoza Wine Bike Tours almost everyday of the week, he said. He picked us up at our hostel at 9:20 a.m. and took us to his car which had three bikes hitched on the back. It was just the three of us.

While he drove us over an hour away to a bodega (vineyard), we talked mostly in Spanish (although he was completely bilingual) and listened to Latino music. He was extremely kind and personable, and we quickly became friends.

It was drizzling outside, but the drive to the bodega was beautiful with all the greenery. We passed rows and rows of grape vines, and I remembered just how much wine is produced in Mendoza. I wrote a column for The Post that mentions the exact numbers.

Bodegas Salentein was our first stop. It was a huge complex surrounded by colorful vineyards. Salentein’s goal was to combine wine with music and art. They had statues in front of the building and a small local art museum that we checked out before watching a video in a theater about the history of wine and its connections to the Bible, which I thought was perfect for Easter.

A tour guide showed us around the bodega. She took us out the back, where a path surrounded by grape vines led to another building in the distance.

She explained to us that in between each row of vines, they let native plants grow to  attract any bugs or viruses away from the grapes. Each row began with a rose bush for decoration, but also because roses were seen as good omens.

Once we made it inside the building at the end of the path, an overwhelming smell of wine and yeast hit me. Emilee joked that we could get drunk just off the smell. Our tour guide explained all of the wines that were made by Salentein and how much they cost. 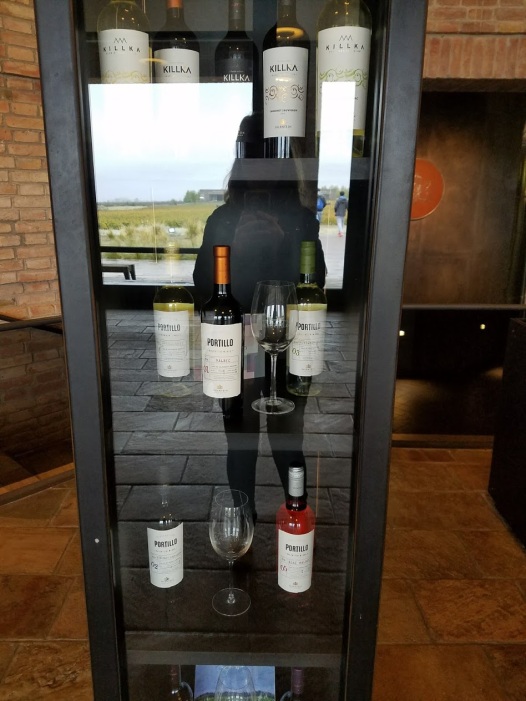 We climbed down stairs into the cellars, where we were able to see how all the wine is made, stored, aged, bottled and aged again. It was beautiful.

Our wine tasting was in this small, classy room that had a table with four bottles of wine. Our tour guide explained how to properly taste the wine and what to think about when trying each one.

After our tour of Salentein, it was time to bike to the next bodega. Luckily, the rain stopped, but just in case Sergio drove behind us so that we could get back in if it started to rain. Biking was a lot of fun, and Emilee and I talked about life as we rode past vineyards.

The next bodega, Andeluna, was just as beautiful as the last, and Sergio stopped the car so we could take pictures of the colorful vineyards. 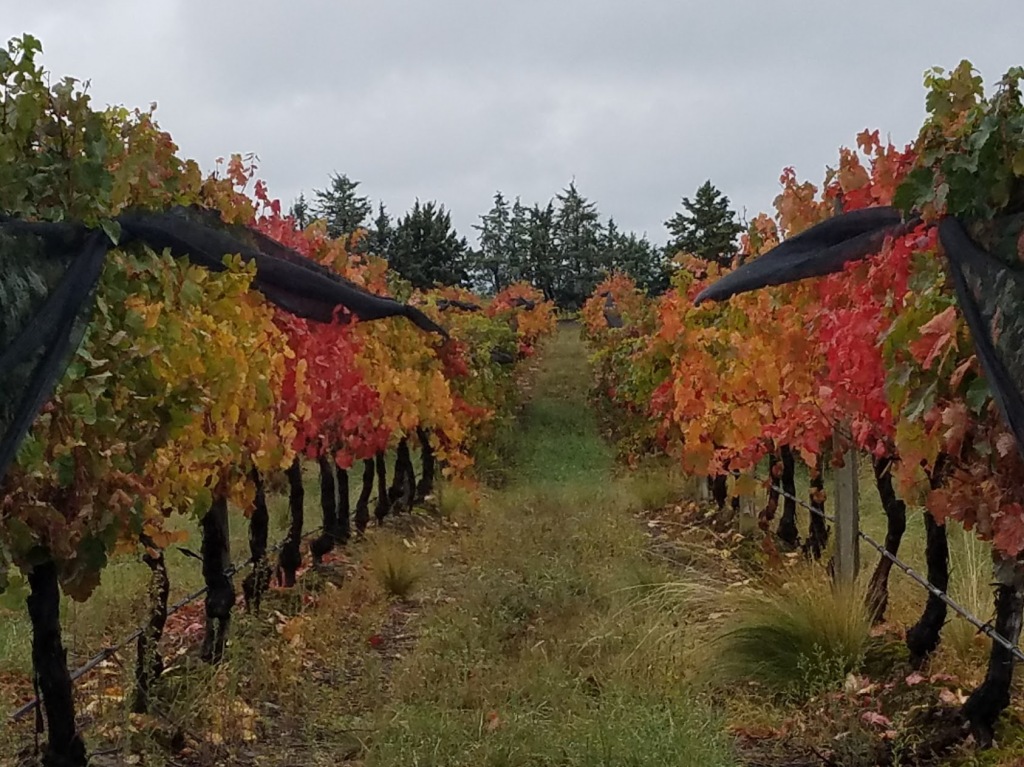 Part of the wine tour, which attracted me to it so much, was the six course lunch with wine pairings. Andeluna has a cozy restaurant with an open kitchen where you can watch them cook. Each plate came with its own glass of wine, and I couldn’t finish all of it. Here’s a slideshow of the lunch with descriptions of each course.

The wine tour was definitely the highlight of the trip, and once we returned to the hostel, we packed up and left for our bus, in which I had no issues. Chelsea gave me a Benadryl, and I passed out for seven hours.

We did a lot of activities in our short time in Mendoza, and it was a nice, chill vacation. I could spend much more time in the wine country. There’s so many trails to hike and different kinds of wine to try.

I hope this blog encourages you to travel, even though sometimes it can get messy, because traveling is the greatest way to meet people from different countries and have great stories. At the very least, if you can’t travel, I hope I have encouraged you to grab a bottle of wine from the grocery store. Try the Malbec from Mendoza. It’s amazing.