Mexican Food, Museums and My Cough

Hola! Sorry it’s been a long time since I’ve written a blog. I’ve been busy, and I have also been trying to combat a cold that I’ve had for two months. I think my cough is getting better, but it’s hard to tell. One day it’s fine, the next I’m waking up in the middle of the night coughing and unable to get back to sleep.

Buenos Aires and the Porteños continue to surprise me day by day. Everyone is much nicer than I thought possible. They’ll invite you (a total stranger) to their house for mate and cake. People have come up to other students from my study abroad company and asked if they needed help with directions. Buenos Aires is so large with so many things to do, I worry I don’t have enough time to do everything (even though I’ve only been here for two weeks and have about 4 1/2 months remaining).

Since I’ve last posted, I have visited some pretty awesome places. This huge bookstore that used to be a theater is the coolest bookstore I’ve been to. The cafe in the back is really cute and has a pretty great cappuccino and cheesecake. 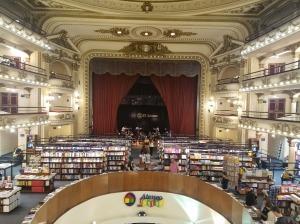 I have also made some friends! I’ve been hanging out with people from my study abroad group, but recently I have made friends with a porteño. She is the person in the middle right. Her uncle read my column, and he suggested she and I hang out. I was worried I wouldn’t be able to make friends with actual Argentines. We all went to this famous bookstore, called the Ateneo Splendid, and then went to a bunch of used bookstores, where I bought a book for 60 pesos ($3).

For the Superbowl, I went with my friends from ISA to a Mexican restaurant, and it was really fun. The restaurant was small, but the decorations were festive, and Frida Kahlo was painted on the wall. I’m a firm believer that whenever Mexican food is involved, the night will be a great night. We ordered cheap tacos, guacamole and margaritas (which were these delicious frozen margaritas with cilantro).  The service was amazing, as they gave us about five free drinks throughout the night. Waiters walked around with bottles of tequila and poured shots into people’s mouths. We also ordered queso, thinking it would be in dip-form, but it came out as this interesting wrap of crispy cheese. Here’s a low-quality photo of that. 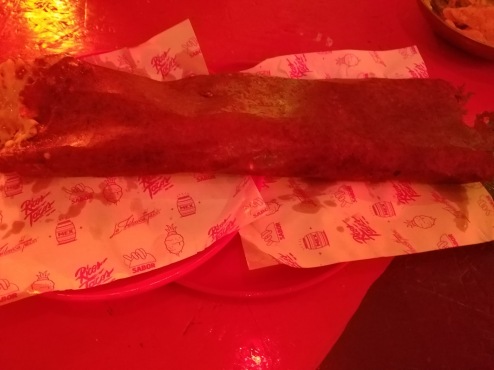 And here is a group picture of our study abroad group at the mexican restaurant.

I’ve also been having some pretty awesome ice cream lately. This fresh banana ice cream was delicious. I also ordered some dulce de leche ice cream at Freddo, an ice cream chain in Argentina, but I had accidentally ordered a huge quarter kilo of it (hopefully I’ll get better with my ordering skills).

After the banana ice cream, we went to a park and did our homework. Another thing that I love about Buenos Aires are the trees. They are so large, and their branches wind up to the sky so beautifully.

With my friends Cam and Holly, we went to the Museo de Arte Moderno de Buenos Aires to see the exhibit of Picasso. The exhibit focused on his work that was too dear to him to sell. It was really interesting seeing some different work of his that I had never seen before. 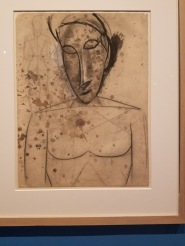 Because Buenos Aires is such a huge city, every kind of restaurant is available.  I have had the best chicken and waffle I’ve ever had at a restaurant called Nola.

Since I last posted, I have also crossed the world’s widest highway. I had no idea Buenos Aires was famous for this until a friend told me as we walked across the street. 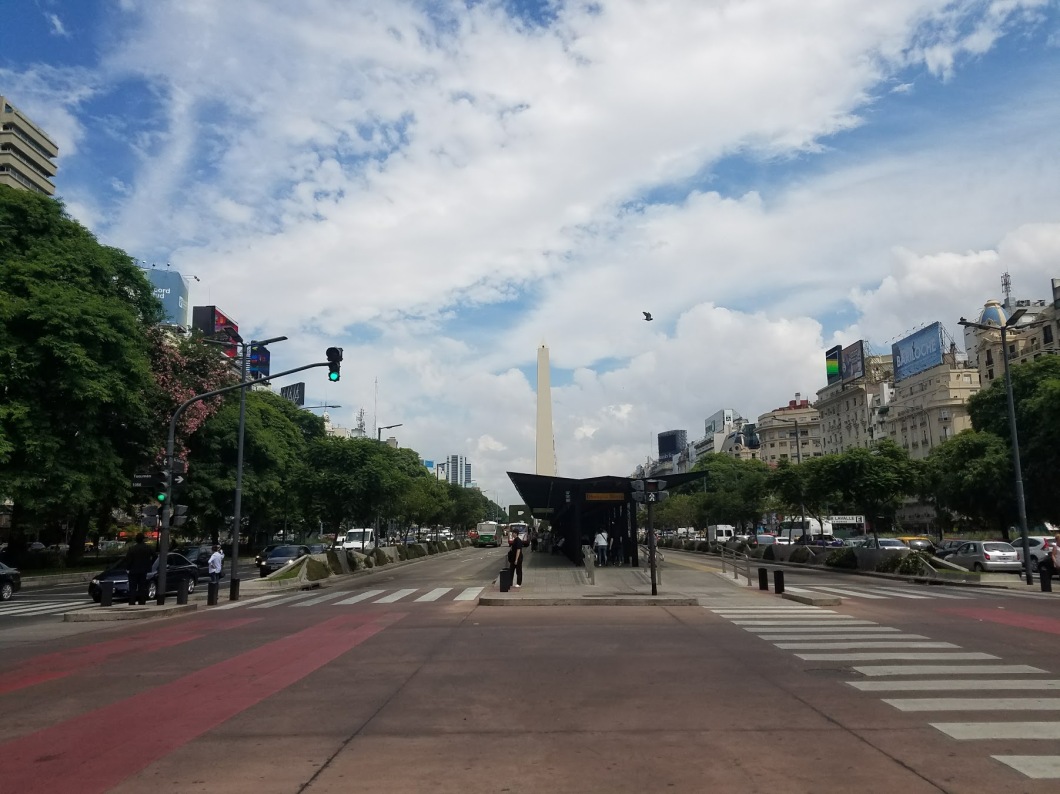 And of course, I’ve been getting to know some awesome people.

That day we walked around the center of the city, saw Teatro Colon and the famous BA Verde, where tourists can obnoxiously take selfies. I also had an awesome churrasquito sandwich at this cool restaurant called Wild Ranch, which was basically a little garage with a bar for sitting. I love finding different, authentic restaurants like these. 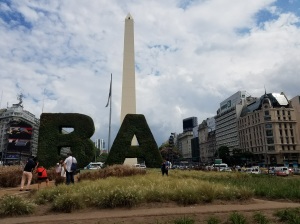 Even on the rainiest of days, Buenos Aires is beautiful and exciting. They allow for museum visits. I bet you’ve been thinking you’ve seen enough pictures of art from museums, so you can skip over the next few pictures. I went to MALBA (Museo de Arte Latinoamericano de Buenos Aires) with a friend and saw some more interesting artwork that really helped capture what life was like during certain periods in Latin America. 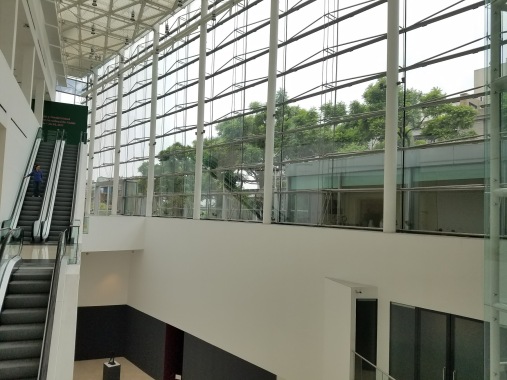 I like this one below because it has a code. Can you figure it out? (Hint: It’s two words, and it’s in Spanish). 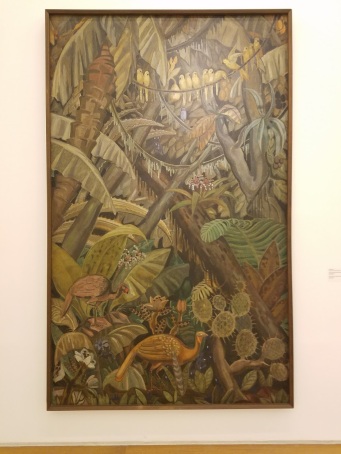 And, finally, I also ran into the famous Frida painting.

The MALBA museum, so far, is my favorite art museum that I’ve been to in Buenos Aires. It had so many unique paintings and artwork, and I learned a lot about Latin America.

For Valentine’s Day, my friends and I found a cool bar and split a bottle of wine. It was a pretty fun time, and I can’t wait to spend more time with them on our trip (we’re going to Patagonia, Argentina, for our Spring Break in a week. We will be visiting Ushuaia, or Tierra del Fuego, Calafate and Chelten. It’s going to be an adventure).

Speaking of our upcoming trip to Patgonia, purchasing our plane tickets was quite an adventure. We had to buy our plane tickets in cash (which is probably something you didn’t think was possible) because it’s about $200 more expensive to buy our tickets with an American debit card. We transferred money from our debit cards to cash through Xoom.com and had to pick it up in one of their stores.

Unfortunately, my friend and I clicked the wrong store and had to go to this bus station to find it. The store was actually hidden and was attached to a travel agency. The first store we were supposed to have sent our money to told us to bring our actual passports, but this sketchy booth in the bus station would only accept copies of our passports. After we found the booth, we had to leave and find a place where we could make copies of our passports. Finally, we paid a bank to make copies of our passports and then went back up to the little box where the guy finally gave us our money. Carrying 9000 pesos and your passport is a little scary, and we ordered an Uber to take us home. It was stressful, but it was an adventure. We bought our plane tickets the next day through Pago Facil (Pay Easy) and then went to that store to give them our cash in exchange for the receipt that says we paid for our tickets.

Anyway, we finally have our tickets, and it’s official! I cannot wait to see glaciers, penguins and mountains. It’s going to be amazing.

Yesterday, we visited Museo Evita, a museum dedicated to the famous Eva Perón. It was an awesome museum, and I learned a lot about this legendary role model in Argentina’s history. Eva was the first lady in Argentina and worked hard to help the working class and helped women gain the right to vote in Argentina. Eva used the house that the museum was in as a place for single mothers to live temporarily until they found a job or a home.

After the tour, we had our meriendas (basically a second lunch in which you eat pastries and drink coffee) in the museum restaurant that used to be the kitchen and courtyard of the house. They won’t let you take pictures in the museum except for in this room, which was very colorful and full of light. 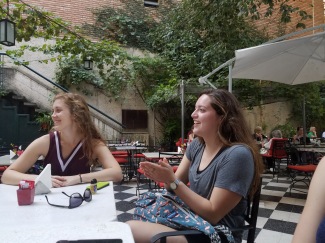 I’ve been eating a lot of medialunas and cappuccinos during these meriandas.

And finally, last night I had mexican food (again) along Puerto Madero, a beautiful neighborhood in Buenos Aires that sits along the river.

We ate at Lupita, a colorful Mexican restaurant along the river, and I had a classic margarita and an awesome burrito with ribeye, chorizo, tomato and an egglpant sauce. It was a good night. 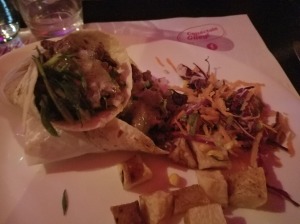 Anyway, you’re all caught up now! Later today, I am visiting another museum (of course), and then tomorrow I’m going on a trip to El Tigre with my study abroad group. I hope to update this blog more frequently since I’m starting to feel better, so stay tuned.

Hopefully this cough will go away soon. It has been a big pain in class and just a nuisance.

Thanks for reading my blog and staying updated with my adventures. I hope my blog inspires you to travel or just do something different that scares you a little! It’s been working out great for me!

P.S. If you have any advice for how to get rid of a 2-month-old cough, please feel free to leave a comment. I’d really like this thing to be gone. Thanks!